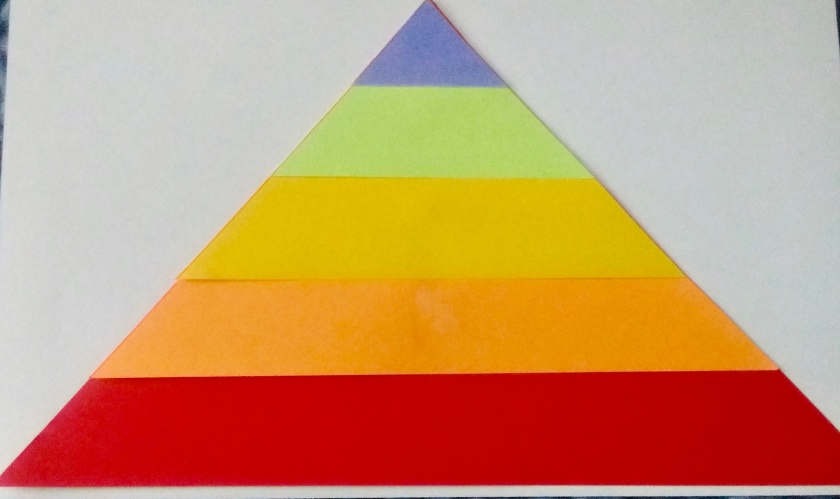 Desiring to build a more compassionate and cooperative society is a noble goal. Getting there starts with respect. However, respect as an abstract concept may be as empty as cocoon after the butterfly has emerged.

Active respect acknowledges and defends another person’s needs and dignity. We started talking about needs several weeks back. Following Abraham Maslow organization of need into five groupings or levels. Maslow uses a pyramid to display the different levels, with the lowest layers being foundational for those placed on top.

In prior weeks we have lifted up the basic biological needs of food, clothing, shelter, air, water, and rest. We then turned to safety. Recognizing a desire for safety drives the compulsion of many to arm themselves—the results quite often are the opposite. An increased number of guns in our homes, cars, and on our persons makes everyone less safe. However, the motivation is understandable. I’ll have more thoughts about these issues in the weeks ahead.

But for now, we turn to the third of the five levels in Maslow’s Hierarchy of Need—Belonging. To belong involves developing social relationships. I want to think about relationships in three different categories: Given, Tribal, and Chosen. END_OF_DOCUMENT_TOKEN_TO_BE_REPLACED

Crafting a better world starts with satisfying human needs—not necessarily everything we want—but what we truly need. Abraham Maslow stated that after meeting the basic biological needs of food, clothing, shelter, air, water, and rest, we must turn our attention to safety.

Whether it is the cave dweller avoiding being eaten, children avoiding abusive parents, or women avoiding sexual assault—safety first becomes the issue. So how do we protect ourselves? END_OF_DOCUMENT_TOKEN_TO_BE_REPLACED

If we want to prevent future conflicts over scarce resources, we should begin now to ensure that everyone has what he or she needs—not necessarily everything they want, but what is needed. That’s not a new idea. It’s as old as sacred texts in every faith tradition of the world. Treat others the way we would want to be treated.

That’s all well and good, but one person’s need may be another’s extravagance. What is today’s “luxury” may be “essential” tomorrow—consider cell phones as a recent example. Fortunately, the definition of need is not merely subjective, subject to the whims of the speaker. END_OF_DOCUMENT_TOKEN_TO_BE_REPLACED

Parenting has been called the most critical job anyone ever undertakes. Yet, for most of us, we have no instruction and few ways to tell if we are competent. Many of the personality scars that lead to anti-social behavior, violence, dishonesty, bullying, prejudice, and poor adaptability can be traced (at least in part) to inadequate parental supervision or support.

So how do we change this picture? In The Doorkeeper’s Secrets, the responsibility of child-raising is identified as a job. Like any other job, people are educated, qualified, supported, and evaluated regularly.

END_OF_DOCUMENT_TOKEN_TO_BE_REPLACED

Saying goodbye to a friend—regardless of how many legs they have is difficult. Particularly true for introverts who tend to have fewer but deeper relationships. Two weeks ago, my four-legged companion departed this life.

END_OF_DOCUMENT_TOKEN_TO_BE_REPLACED

Let’s take one more look at the Five Foundational Principles of an Interdependent Society. In my novel, The Doorkeeper’s Secrets, the goal is to birth a society where everyone is dependable; therefore, we can expect others to act with our (and their) best interest in mind.

The five foundational principles create a matrix enabling everyone to give their best efforts, be safe, and find joy in their work, families, activities, and lives. The diagram attempts to illustrate how that might work.

END_OF_DOCUMENT_TOKEN_TO_BE_REPLACED

The fifth and final principle for creating the kind of future envisioned in the novel, The Doorkeeper’s Secrets is supporting the Common Good. In many ways, this is the most important of the five.

Without the “leveling” influence of the Common Good, each of the other four principles could be distorted—either deliberately or by the over-enthusiastic supporters.

For example, Faith could be turned into an exclusive measuring rod projecting one interpretation as superior to all others. Vigilance could be shaped into mob-like squashing any deviance from the “accepted norm.” Even community can become a collection of people who look and think alike; effectively banning anyone with new ideas or perspectives. Finally, Respect could be interpreted from a self-serving perspective: “if you don’t respect me, I don’t have to respect you” attitude.

However, the Common Good serves as a check against the various abuses that can be misconstrued from the other four. The Common Good becomes the fertile soil where Community Respect and Faith can take root to produce fruit enjoyed by all. Likewise, Vigilance takes up its stand to “ensure the Common Good;” not to impose the will of one group over another.

When each of the five principles remains in balance, we have a built-in guard against the excesses which seem to inevitably arise out of human nature. Human nature is imperfect, so there will be people who resist any limitation on their so-called freedom.

In our culture “freedom” has been used as an excuse to enshrine excesses. A common axiom is “One person’s freedom ends when it infringes on another’s right.” I don’t have the freedom to construct a house on someone else’s property. In like manner, no one has the “freedom” to end another person life by violence. Yet it happens every day—and we continue to debate the right of gun ownership, opposed the right to live with less fear for the safety of ourselves and our children.

Suppose we replaced the current axiom with another. “One’s freedom is unlimited until it threatens the Common Good.” That is the basis of my vision of the future. There will be more discussion of weapons and safety for the future in later blogs. For now, let’s look at the role Common Good plays in shaping a positive speculative future.

It’s easy to identify things that diminish the Common Good. Listing a few might be helpful in establishing some of the parameters to our thinking.

So, what inhibits support for the Common Good? Inequalities of any kind: racial, gender, age, lineage, nationality, education, financial rewards, physical strength, honors, weapons, or power over others. We could name other places where there are imbalances in our society: access to health care, clean water, healthy food, knowledgeable advocates, jobs with advancement potential, warmth in the winter, and comfort in the summer. Of course, any of us can add to the list.

The goal of the Common Good is not to reduce everyone to the lowest common denominator, but to encourage and enhance everyone’s gifts for the good of all. There will always be differences—it is our differences that give every life value.

One person is a skilled artist, and another can’t draw a stop sign. Assuming the artist desires to pursue art—the goal of creating the “best” for all is to encourage and enhance the artist, so that we may ultimately enjoy or appreciate the art. The Common Good is served when people are encouraged and supported in doing what they enjoy.

But the good of all is not served by having an excess of mediocre artists (or doctors, or teachers, or any other profession). In my vision of the future, there comes a point when those who are performing less than adequately will be encouraged to think about their next career. At some later time, it may become more than a suggestion. Standards for each profession are clear, and regular evaluations confirm progress or suggest issues needing attention. These standards are created and reviewed by practitioners with input from clients for each service.

The Doorkeeper’s Secrets version of the future has everyone receiving sufficient income to meet all their needs, have adequate housing, healthy food, highest quality medical care, transportation wherever they need to go, and education to train or re-train for any job for which one qualifies (by temperament and intellectual capacity). The Common Good is served when stress and worry over these things are minimized. Then one can give their attention to their families, their work, and their avocations (hobbies and services).

So, friends, tell me what you think about this kind of future. Does the concept of increasing the Common Good introduce some sanity into some of our current discussions? I’d love to hear your thoughts.